Hey there, it is SMASH LEGENDS!

The following changes will be in place after the Oct 26th (Tue) update.

- Lobby screen will be changed to get into the spooky spirit.

- The background music of the Lobby will be changed to the Halloween theme. 🎃 Addition of a New Legend 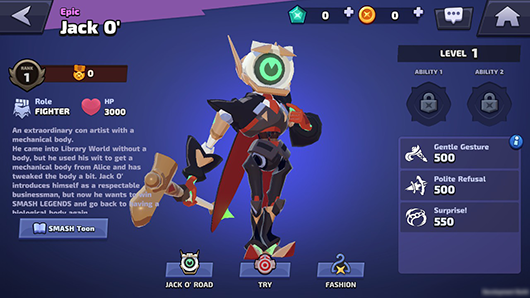 Jack O' is a fighter who can fire a sharp spinning blade, dealing high amounts of damage.

He introduces himself as a respectable businessman, but in reality, he is just a con artist with a mechanical body.

: Stabs and swings the pole, dealing a total of 500 damage.

Swings the pole when used as Aerial Skill, dealing damage.

Charges straight in the air and deals damage to opponents when used as Aerial Skill.

: Fires a sharp spinning blade. The blade deals damage to the opponent.

The blade will return to Jack O''s location when the spinning is complete.

If Jack O' catches the blade again, the cooldown of the Ultimate is recovered by 80%.

: Increases damage of all attacks by 12% for 6s when Ultimate is available.

: Increases Movement Speed by 18% for 2s after using Ultimate.

: Begins the match with 50% energy charge required for Ultimate.

This does not activate upon revival. The spinning blade of the Ultimate becomes 20% bigger.

: Adds 1 extra count for the Skill, enabling consecutive use of the skill.

The Ultimate damage increases by 12%.

- Once you purchase the SMASH Pass Season 8, you can obtain the Legend, Jack O', as the paid 15th reward.

- Once the SMASH Pass Season 8 ends, Jack O' can be obtained from Silver Box or higher grade.

- Once the SMASH Pass Season 8 ends, Jack O' can be obtained from Special Box or Super Special Box in the Shop.

■ Addition of a New Event

- Halloween Event Pop-up Store will begin after the update.

: Get event coins from completing the pop-up store missions,

and exchange them with Pumpkin Box and many more!

: Please refer to the event notice for more information. 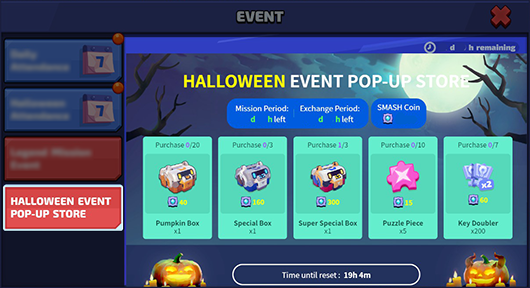 Only exchanges will be available.

* The date and details are subject to change due to internal circumstances.

- New Halloween Attendance Event will begin after the update.

: Tab the event button and participate in the attendance event for 7 days,

: Please refer to the event notice for more information. 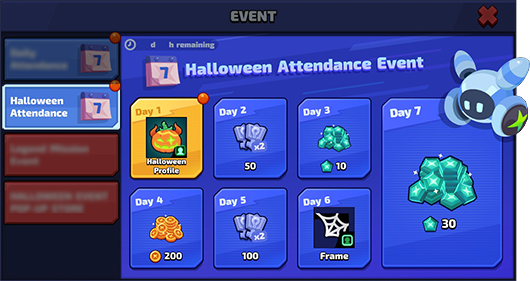 * The date and details are subject to change due to internal circumstances.

: When you enter the SMASH Pass screen for the first time, the new season notification page will be displayed.

: Upon clicking the SMASH Toon button in the SMASH Pass window, it will lead you to this season's Pass Toon page.

: You can get various items such as skins, profile icons, and fashion items by completing SMASH Pass missions.

: New Legend, Jack O', can be unlocked when you purchase the SMASH Pass and reach the 15th stage in the paid pass track.

- Once you purchase this season's SMASH Pass, you will get the following benefits.

: Jack O' is available when you reach the 15th stage.

: During the SMASH Pass Season 8, the quest limit is increased from 6 to 9. 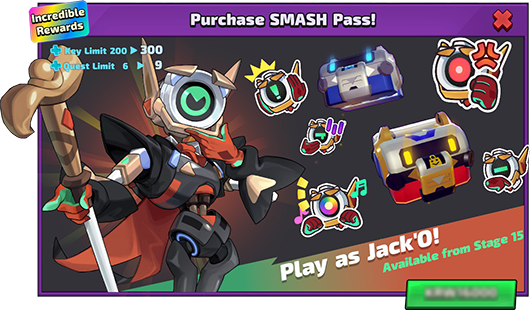 - At the Dream Shop, two Legends, Hook and Flare, are added. 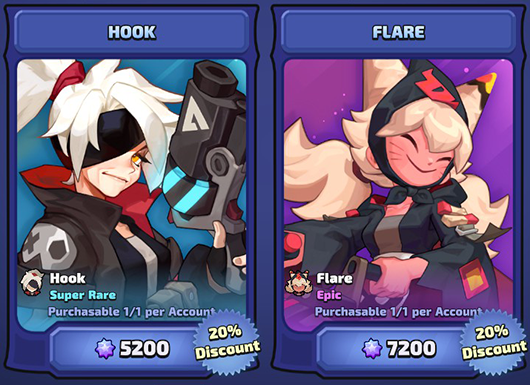 - Halloween Peter skin and Halloween Hook skin have been added to the Dream Shop.

(Halloween skin’s rarity is epic. Upon equipping the epic skin, it will change the Legend's appearance and skin effects accordingly.) 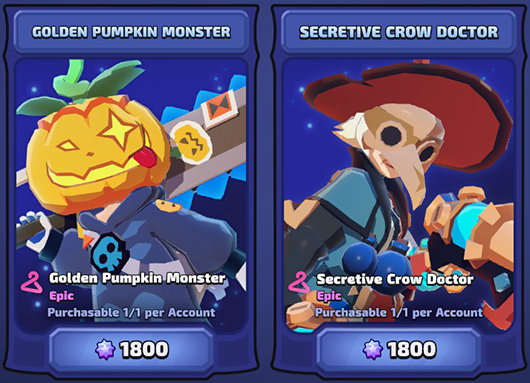 * Please be noted that these skins will be displayed at the Dream Shop even if you don't own the respective Legend.

- Witch Queen Emoji Box and Don Quixote Emoji Box have been added to the Dream Shop. 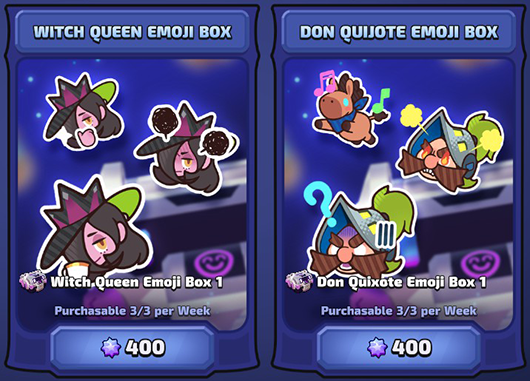 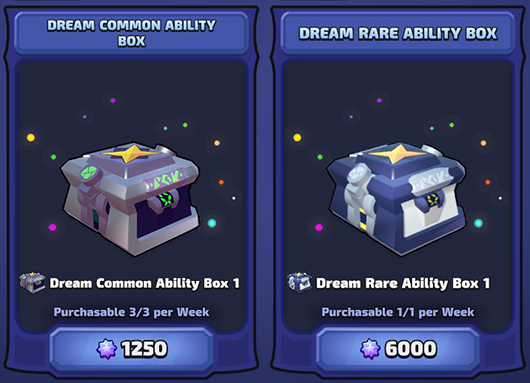 - Halloween Skin Packages have been added to the shop.

(Halloween skin’s rarity is epic. Upon equipping the epic skin, it will change the Legend's appearance and skin effects accordingly.)

* If you don't have the Legend, the package will not be displayed.

- New Korean and Japanese voice options have been added.

: Tap Settings > Others > Change Language. Then, you may change the language of the voice.

For other languages, the default voice language will be English.

* Please be noted that you may choose voice in the language of your choice. (e.g. text language: English, voice language: Japanese)

- Based on the number of medals for each Legend, the reset amount and rewards will vary.

: Upon medal reset, you will get Dream Pieces based on your number of reset medals.

- If you are entitled to the medal reset, a profile icon will be provided as a season reward.

* For those who have already obtained the profile icon from the previous season reset, you will not receive a new one.

- For those who reached the TOP 500 worldwide, a special profile frame will be rewarded.

- The 7th Season will begin.

: After medal reset, Legend Roads and Medal Roads will display your current number of reset medals.

: The highest medal record you reached previously will be displayed in Legend Roads and Medal Roads.

: The current medals in Medal Roads are the total number of each Legend's reset medals.

: Even if the medal league is lowered after the seasonal medal reset, the league box will still remain as the previous season.

- Changes have been made in Standard Arena.

: Duo Deathmatch (Event Arena) has been moved to the 3rd slot of Standard Arena.

: Crown Guard has been excluded from Standard Arena and gets moved to the Event Arena.

- Dominion mode rule has been improved.

: The initial activation period of the Dominion Point has been extended.(3s → 7s)

: The time it takes for the team in control of the Dominion Point to get the point has been reduced. (16s → 12s)

: Now you need to push back all of the opposing team Legends from the Dominion Point for 1s to earn the final Match Point of a game.

: The distance the camera captures the opponent Legend increases.

: When there is an opponent Legend on the screen
ㄴThere is now a higher chance that the camera view will focus on your own Legend to be located in the middle.

: Improved the camera view to reset quickly when the opponent Legend disappears from the screen.

- Battle Royale's items have been improved.

: When you defeat the opponent Legend, Red Candy will be dropped.
Upon picking up the Candy, it will restore your HP by 12%.

: When you acquire a Donut item, it will increase movement speed, and this effect can be stacked. 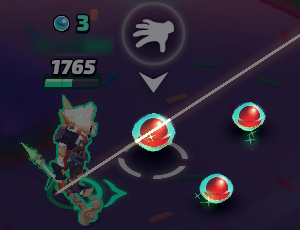 However, it gets very difficult to fight against Nui due to her wide range of skill attacks.

Therefore, we have reduced Nui's skill size, which will allow a chance for the opponent Legend to attack Nui.

: Attack range has been reduced.

: Robin is a very agile Legend who can avoid opponent foes' attacks and seek a chance to counterattack.

However, when he fights against multiple foes, Robin was quite struggling as there were not many ways to deal with it.

Now, his charging attacks can penetrate and give high damage to multiple foes at the same time.

Also, the damage of his Aerial attacks has been reduced as it was considered too versatile.

: The projectile of charged attacks will now penetrate foes.

- The remaining time of the package with an expiration date of less than one day will be highlighted in Red.

before loading the information when you enter the shop for the first time.

- Some of the items have been adjusted, and puzzle boxes have been removed from the rewards.

- As a recurring reward after reaching the final stage, you will now get Key Doubler instead.

- [i] button has been added to the SMASH Pass rewards, and you may check your rates there.

- The UI indicating the direction during the charging attacks has been re-designed. (e.g. Robin Skill, etc.)

- You may now spectate players in Custom Match.

: Button for neutral camera view has been added, and you may spectate players that are alive.

(However, players that are located far away might not be able to see.)

: In Dominion mode, the camera view focuses around the Dominion Point. 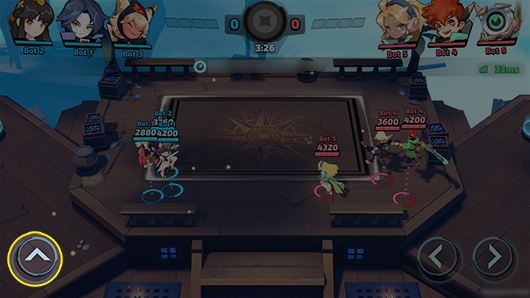 - (PC) Custom Keyminds UI will be activated only when you choose the Custom Keybinds option.

- (PC) You may now use emojis only when you play the game (just like mobile).

- Chat system has been improved.

: When chatting in the Lobby, chats will be displayed in the same way as the Custom Match.

ㄴPrevious: Chats were displayed above the Legend's head in the Lobby.

ㄴAfter change: Chats will now be displayed next to the chat UI on the upper right screen.

: Chat pop-up does not disappear even if you enter the matchmaking.

: Chat pop-up can still be checked with the chat button on the upper right.

: You may still use the chats pop-up in the matchmaking screen.

- When you tap the tooltip button while entering the matchmaking, you can check other tooltips.

- When entering the Legend list screen, the scroll moves to the Legend you have currently selected.

- Fixed an issue where the SMASH Toon button of Legend Alice was deactivated.

- Fixed an issue where Legend Cindy's voice was not available when she hit foes with her jump skill.

- Fixed an issue where weapons disappear when equipping Wings of Darkness skin in the Swan form while not attacking.

- Fixed an issue where Nui's ground skill damage amount was fixed as 500.

- Fixed an issue where Don Quixote's Ultimate was stopped when hit by Rapunzel's skill.

- Fixed an issue where a Lobby object appeared during the animation upon acquiring Legend, Robin.

- Fixed an issue where Snow was likely to fall when using skills at the edge of a map in the Duel mode.

- Fixed an issue where [{0} road] was displayed in the Legend purchase ation pop-up.

- Fixed an issue where only 1 ability was displayed in the battle log.

- Fixed an issue where space was entered automatically upon entering chats directly.

- Fixed an issue where bots in the Try mode intermittently appeared in the Lobby.