The link has been copied.
Update

Hey there, it is SMASH LEGENDS!

The following changes will be in place after the Nov 9th (Tue) update.

■ Addition of a New Map

- The rotation order for 2nd Arena after the update is as follows.

A late-night has come to the Sweet Maze where a witch created it to attract children who have lost their way in the forest.

Who will be a Legend of the first place in this new Battle Royale place?

but there is a high possibility that things will get more intense even at the very beginning of a match as you will be located very close to a foe.

When you go into the central part of a map, be sure to watch out as you could fall off.

- At the Dream Shop, two Legends, Ravi and Wolfgang, are added. 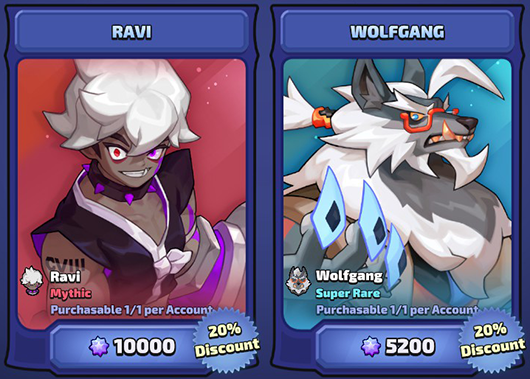 - Halloween Ravi skin has been added to the Dream Shop.

(Halloween skin's rarity is epic. Upon equipping the skin, it will change the Legend's appearance and skin effects accordingly.)

- Nui Emoji Box and Rapunzel Emoji Box have been added to the Dream Shop. 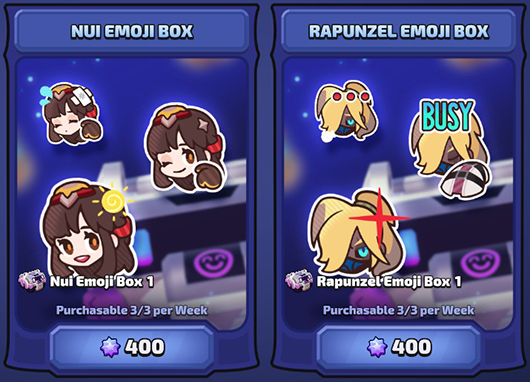 - Halloween Skin Packages have been added to the shop.

(Halloween skin's rarity is epic. Upon equipping the skin, it will change the Legend's appearance and skin effects accordingly.)

* Upon purchasing Halloween Skin Package, you may acquire below.

* If you don't have the Legend, the package will not be displayed.

: Upon purchasing it, 625 Puzzle Pieces will be sent to the mailbox.

: You may acquire 625 Puzzle Pieces of the Legend of your choosing. 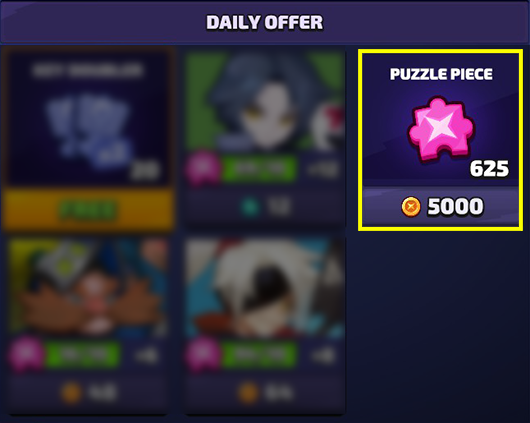 - You won't be able to select and acquire Puzzle Pieces for Legends that you don't have.

- You can receive the item in the mailbox after purchasing it.

- Above details are subject to change due to internal circumstances.

: The replay is available from the beginning of a match, and you won't be able to choose a specific starting point to view from.

: Replays that its version is different from the current one are not available.

: To go back to the battle log, please touch the screen during the replay or click the [LEAVE] button.

: Fixed an issue where the target Legend is located behind Jack O' during Jack O''s second attack.

This happened when Jack O' made the first attack at a near distance.

: Stun and knock back amount of the first attack gets slightly increased.

: When she successfully targets a foe with the first projectile of the third ground attack,

we have improved her second projectile to be linked better.

Changes are made for Octavia to recover allies easier.

From now on, the projectile of Ultimate will get located to the allies that are near.

: The third attack's first projectile knock back angle gets increased.

: The projectile of Ultimate will get located to the allies that are near.

: An issue was found where Peter's sword keeps damaging a foe who was in contact with the sword

even after Peter's sword movement stopped.

From the point of a targeted foe, it is hard to recognize Peter's attacks, and it may seem like a bug.

Therefore, we have changed Peter's ground skill hit detection to be finished faster.

: Hit detection will be finished faster.

: There was an issue where ground attacks always get linked after aerial attacks, which made her too powerful.

As this is not intended, we have made these combos not possible.

: Red has been designed to use her invisibility feature and attack without allies realizing it.

However, taking a lot of damage by a Legend who was invisible can be considered unfair.

Therefore, we have added a hint which would allow foes to guess Red's location.

Also, we have made Red more challenging to use the invisibility feature than before.

: Footprint effects are added when moving during the stealth.

when Robin repeatedly uses the first and the second attack.

: The time it takes from the second to the third attack will be slightly faster.

It was not only difficult to notice that this effect activates once every 15s, but it was challenging to make the most of it.

From now on, the ability will always be triggered after using Ultimate by default.

However, given that Snow uses Ultimate quite often, the amount of damage has been reduced accordingly.

- Previously: Increases the next Ground Skill damage by 20%/30%/40% after using Ultimate.

This effect activates once every 15s.

- After change: Increases the next Ground Skill damage by 12%/18%/24% after using Ultimate.

This effect activates once every time you use Ultimate.

- Changed Legend, Peter's MVP voice to be the same as the text's one.

- When checking the Fashion of the Legend, Ducky and Swan in the Lobby/Try mode, you may now tap a button to change the option of [Ducky]↔[Swan].

- Removed the medal increase or decrease display from the Event Arena result screen. (As you do not gain or lose any Medals in Event Arenas.)

: Reduced the stun duration of [Magnet Bomb], and improved an issue where targeted Legend falls off from the map as they were stunned.

- The chat button at the matchmaking screen will not be activated for those not in a team.

: For those who are not in a team, the chat button is not available to use, so we have deactivated it accordingly.

- Each Legend will have its separate line at the beginning of a match and at a spawning time.

- UI in the Settings will be improved.

: UI and style of [General], [Controls], [Account] and [Others] in Settings tab will be improved. 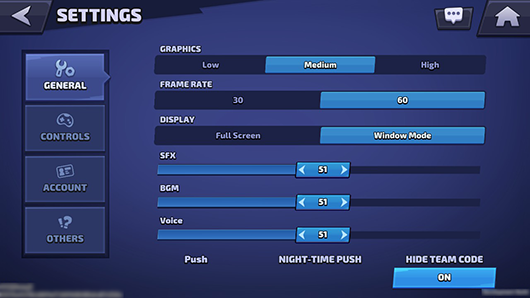 - UI and style of Legend fashions will be improved.

: To see all the items at once, it will now show the icon instead of the name.

: It is easier to see and equip Legend's skin, effects, and emojis.

: Equipped Emojis are saved for each Legend, respectively. 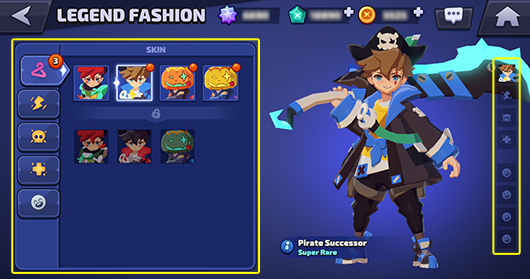 - Added a feature where you could hide team code in Custom Match/Party Screen.

: Upon touching the team code in Custom Match/ducky and swan Party Screen, the code will be hidden accordingly.

: Fixed an issue where Don Quixote's Ultimate gets stopped when getting hit by Rapunzel's ground skill.

: Fixed an issue where the Skill gauge was not returned as much as reduced damage amount

when receiving a damage reduction effect from the upright growth ability.

: Fixed an issue of abnormal Ultimate gauge display when re-entering a match during the Ducky form.

: Fixed an issue where Jack O' voices are not available when Jack O' is the MVP of a match.

: Fixed an issue where a rare ability [Daybreak Energy] did not give the intended ray of light damages.

: Fixed an issue where Red could not hang on the edge

when attempting to move outside of a map during the attack.

: Fixed an issue where ability effects are not applied during attacks

(including not only ground skill, but other types of attacks) when using [Blitz Blade] ability,

- Fixed an issue where the [i] button in the Lobby Arena slot does not work.

- Fixed an issue where the number of opposing Legends were not correct when [ FINISH TIME!] UI appears in Dominion mode.

- Fixed an issue where the Dominion gauge was stopped at 98% intermittently.

- Fixed an issue where jumping did not occur even when stepping on the activated jump pad.

- Fixed an issue where the score of Harvest War does not get updated.

- Fixed an issue where a blue screen is displayed when attempting to re-enter right away after leaving [Try] mode.

- Fixed an issue where emoji preview gets started from the middle part of the animation.

- Fixed an issue where notification of yours stays when viewing other players' profiles.

(This happened when you had your notification in your profile.)

- Fixed an issue where you could still hear emoji sounds even when you are located far.

: From now on, the volume of the emoji will be adjusted.

(Depending on how much you are located from a player using an emoji, either you hear the sound a little bit or none at all.)

- Fixed an issue where Legend voices are not available when players adjust Legend voice through the volume slide bar in the setting.

(* Legend voices: It refers to only the example voice players can hear upon adjusting the Legend voice volume.)

: When controlling [Voice] in General Settings, the voice volume will now be based on the chosen language.

- Fixed an issue where PUSH notification gets deactivated when logging out from the app.

- (Mobile) Fixed an issue where Legend's default voice is set as English when installing the app for the first time.

- Fixed an issue where the background of the Lobby screen is shown in yellow-green.

- Fixed an issue causing the mailbox to display only some of the mails.

- Fixed an issue where some of the texts are cut off when opening multiple boxes.

Hello, This is the Dragon Flight management team.


null has been temporarily restricted from using the community due to the following reasons.

If you receive restrictions due to inappropriate behaviors, you may be disadvantaged when using certain contents or participating in events.

Move to the Login page?

Even after deleting a notification,
you can still view them in "Notification Details".

Please check before starting the game!

Move to the login page?